Intelligent signaling devices make traffic lights not only safer, but also more efficient. The newly published VDE SPEC "Interface for digital Signals and Sensors for Traffic Light Control Devices" is a paper that deals with the introduction of an open, intelligent, digital interface for units that are typically mounted on the traffic light pole.

The modern citizen demands an innovative and environmentally friendly infrastructure. This refers to all areas of life - from smart homes to smart cities. It is believed that with modern traffic light control devices comes an improvement in safety and reliability. Functional safety and high availability are a given. Intelligently networked systems are ubiquitous and increase environmental friendliness to a high degree. Compared to conventional systems, they enable copper consumption to be reduced by up to 25%. In addition, smart traffic lights save energy and thus drive the digital mobility of the future.

This VDE SPEC "Interface for digital Signals and Sensors for Traffic Light Control Devices" deals with the introduction of an open, intelligent, digital interface for units that are typically mounted on the traffic light pole. These can be of a safety-relevant nature such as signal heads, but also of a non-safety-relevant nature like push buttons.

This VDE SPEC specifies the parameters and the physical characteristics of the interface for bidirectional communication of traffic light controllers with distributed signalling and detection devices in an architecture according to EN 50556:2018, 3.2.8 "Centralized power supply, distributed intelligent system".

The interface specified in this VDE SPEC is intended for use on permanently installed as well as transportable TLC (Traffic Light Controller). In order to be able to fully exploit the technical and economic potential of the decentralized architecture, not only safety-relevant data but also non-safety-relevant data according to the VDE 0832 series of standards are supported.

Optical signalling:
The signal heads developed along this specification provide comfortable functions like the control of luminosity dependent on operational time, to complement the physical degradation of LEDs. Thereby the lifetime can be sustainably extended. By the standardised connection, additional components can be connected without special skills.

Acoustic/tactile signalling:
To enable a consistent wire-saving technology, it is important to include the blind signalling devices, which combine not only the safety-relevant functions of the release but also non-safety-relevant functions such as the time-dependent volume adjustment, the regionally differently handled orientation tone, and the sensor system for the requests.

Sensors:
It is important to include the non-safety-relevant sensors that are independent of the blind signal generators; in the first step, this concerns components such as request buttons and traffic detectors.

The following ILT components are included in the scope of this document:

Graphics from this VDE SPEC

Register at the Manufacturer Identifier

How do I apply?
Fill out the registration form that you will receive after contacting Mr. Kesic (marko.kesic@vde.com), sign it and send it to the Central Registration Office:
VDE e.V., Manufacturer ID VDE SPEC 90013, Merianstraße 28, 63069 Offenbach, Germany

What is the approval process? 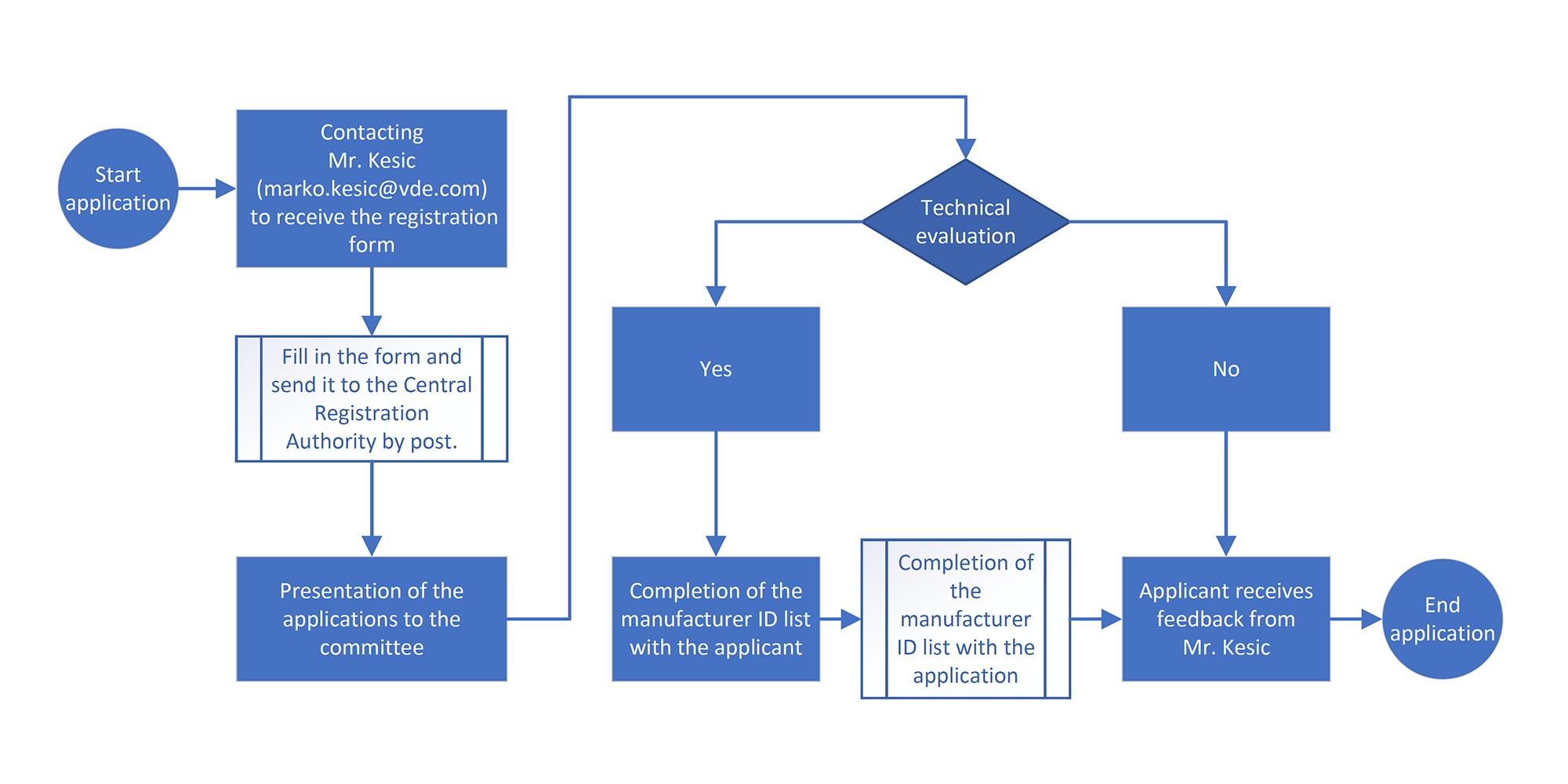 Relevant news and information about standards